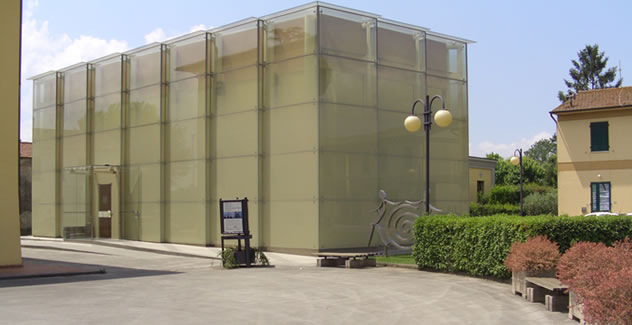 Porcari Municipality supported it foundation which offered the area next to the city hall to realise it.

It was chosen a futuristic and dared architecture: a glass palazzo, raising in the centre of the piazza where the classical, composed city hall contrastingly lies.

Palazzo di Vetro (glass palace) is the Foundation first expression aim: a public transparent place, at the community disposal, where social, cultural and business initiatives can be promoted.

It was inaugurated on November 21, 2003, the ten-yearly recurrence of the early Giuseppe Lazzareschi’s death.

Since then, the Foundations has always been promoting many cultural and social initiatives, most of them focused on the work quality, especially in the paper mill sector.

We are proud to manage the adjustments for its public activities such as exhibitions and conventions.