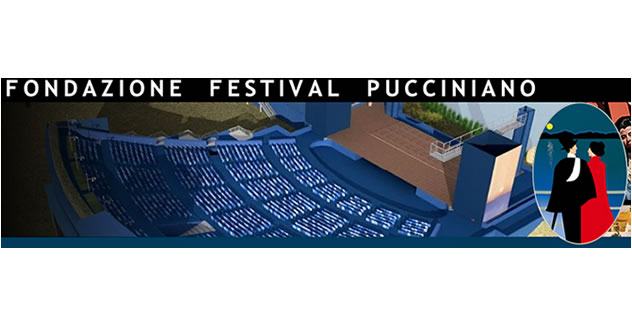 It’s superfluous to talk about Puccini Festival, now in 2009 in its 55th edition, because everybody knows it, also the audience who don’t love bel canto.

“La Boheme”, “Madama Butterfly”, “Manon Lescaut” and the other Puccini operas are played in the new great open air theatre. The ambience is framed by a wonderful view of the Massaciuccoli Lake whose flickering lights on summer nights assure an unforgettable natural scenery. The stage of Torre del Lago as hosted the most famous and acclaimed names of world opera and the success of Puccini Festival is higher and higher every year. The Festival is followed by a multiethnic audience, people of every walk in life and coming from all around the world.

Everybody knows how important Puccini Festival is for our land. That’s why it has to be organised with more and more careful attention. We are proud of taking part of it and of enjoying Fondazione credit.

Today, when we talk about Puccini festival we mean the new Great Open-Air Theatre which has become its new head office since 2008.

But it is important to tell how simply and improvised Festival organisation was during the last decades. The theatre simply consisted of Innocenti tubes and the dressing rooms were inside prefabricated boxes.

In the following years, many seasonal re-editions took place and the changes of the set systems were to heavy and needed non-stop regulatory requirements for operation. Today everybody can benefit by the beautiful and techonological new theatre extolling its quality and previewing an universal success taken for granted.

But we would like to remember what people always forget: that strange, shaky, metallic building which changed year by year as an ugly turned into a beautiful swan. It was possible thanks to the enthusiasm of those supporters who loved Puccini’s music and who wanted to keep Puccini’s memory alive.

We have supported Puccini Festival for its first building, providing our consultancy for the safety and electrical systems and managing the administrative procedures for meeting regulatory requirements for operation. We can’t deny that we were overwhelmed by our nostalgic emotion when the old structure was pulled down (demolished) to build the new great theatre.