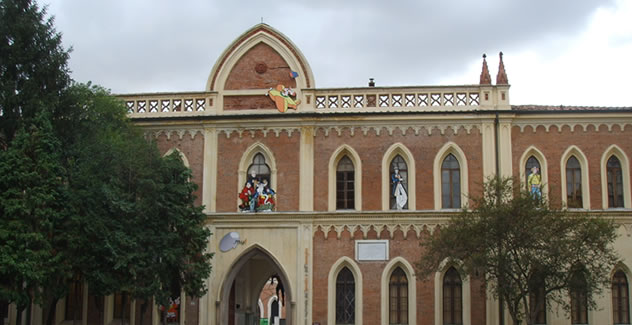 “Museo Italiano del Fumetto” has been recently established by the Municipality of Lucca as a national-wide significant centre for comics. This museum is extremely important in our area, especially for the “Lucca Comics & Games” exhibition which attracts thousands of comics lovers every year.

It is housed in the city complex that was once the Lorenzini barracks, and before that, the S. Romano Monastery, and the building has now been fully restored to its ancient splendour. The exhibition rooms are modern and equipped with highly technical systems and computers.

We conducted project management of the technological systems and the authorisation procedures to open the museum.

The working group for this grand initiative was highly qualified and carefully chosen, and we are proud to have been among the companies selected.  The project had great expectations, and we were gratified by the good results.

The Museo Italiano del Fumetto, MUF, is housed in the complex that was once a barracks and, before that, in medieval times, the Monastery (Monastero di S. Romano), inhabited by Dominican friars,  particularly prestigious establishment playing an important role in the life of the city.  Because of its particular location, near the city centre and public buildings, it held a more privileged position than the suburban monasteries.  Over time, the monastery assumed even greater importance, and was visited by many historically important personages, including Girolamo Savonarola, Fra’ Bartolomeo della Porta the painter and others.  It was the preferred burial site for many Lucca families, including the Bernardini, Mansi, Bottini, Massoni, Cittadella and others.

In spite of its religious significant, by the middle of the sixteenth century, during the spread of heresy, the Monastery adopted a different canonical viewpoint of the S. Frediano diocese.  By 1868, both the Church and the Monastery were State property.  In 1889, the Municipality of Lucca sold the use of the Monastery to the Army in exchange for a permanent cavalry regiment; eventually the Monastery was converted in a barracks   The stables date to the end of ‘800; they were designed by Carlo Cervelli who adopted a Neo-Gothic architecture.

Going back over its history we can see the many changes that the original building of the S. Romano Monastery has undergone and the many uses it has served.  Nevertheless, its original design and structure are still visible.