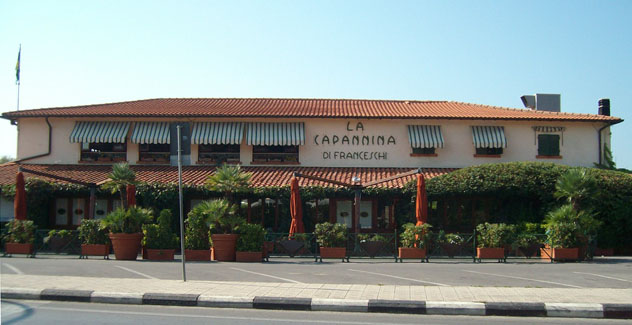 La Capannina is an historic nightclub in Viareggio which is known around the world for its prestigious shows and its selected clientele. It has been the symbol of the nightlife for more than 60 years and it represents one of the most important spot for tourism system in Versilia. Today, La Capannina maintains its own original structure which made it famous and successful.

La Capannina was both designed and realised by Achille Franceschi, an unforgettable man of the roaring years in Versilia. It was completely destroyed by a fire and rebuilt in 1939. Its charm is incomparable and it remains the “go to” spot for audiences at any age.

For nearly 20 years, our studio has managed the procedures for meeting regulatory and safety requirements to operate. Even if these requirements were definitively met in 1993, we are still offering our consultancy for any other future requirements.

The prestige, the traditions and the location of this club require state-of-the-art but not invasive technologies. In this respect, our studio has provided consultancy for safety systems and fire prevention to the total satisfaction of our client, Gherardo Guidi, La Capannina Corsporation’s manager.

Achille Franceschi, a high profile businessman and ex mayor of Forte dei Marmi, started "La capannina di Franceschi" of his own idea and free will in 1929. He wanted a new “place to be” for night life and the dating scene in a desert area in those days while new bathing establishments were slowly coming to life. At that time, the club was just a hut which was used as fishing tool shed for twenty years.

It was a wood and branch hut covered by cloth and provided with an artisan and picturesque bar and a few tables and chairs.

The idea was successful and the club was soon attended by a selected clientele who made it famous around the big industrial cities. The owner, at the end of the first season, was forced to knock the club down to re-build a bigger and more efficient one. The new Capannina was wider and provided with a regularly equipped kitchen.

In its second activity year, La Capannina made its first quality leap multiplying its more and more exclusive and blazoned clientele. It was the first myth which made Versilia famous around the world.

Later, Achille Francesci abandoned the old original gramophone and engaged an exotic music group: the first “cult” club in Versilia was born. Its fame was equivalent to the international clubs.

In 1993 the club was completely destroyed by a fire but in just sixty two days it was built up again. The new building project was more safety oriented and the club was built to meet the bigger clientele expectations.

Today, the building is still admirable with all its singular architecture and decorations which made it famous all around the world.

From its inception to nowadays, La Capannina has been the symbol of exciting nightlife in Versilia and has contributed to the creation of the Versilia, and especially Forte dei Marmi, prestige.