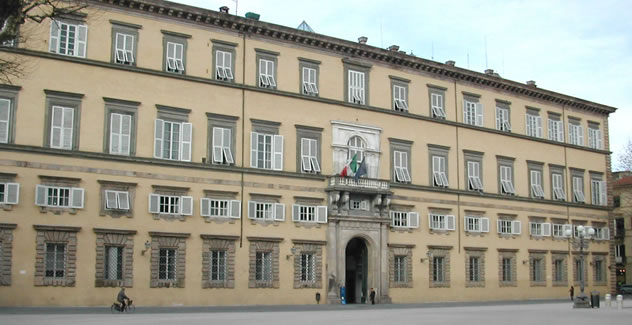 The ancient and prestigious Palazzo Ducale, built by Castruccio Castracani and which dominates the bigger square of the city, is now the headquarters of the Provincial Government and the Prefecture in Lucca.

For years, it was only used as administrative offices with no care of its internal richness and ancient magnificence of the halls which discreetly witnessed Maria Louisa of Bourbon’s events.

The restoration of the Palazzo Ducale in Lucca was a focal point for the Provincial Government’s operative policy of reinstating its institutional and cultural visibility or creating it where it did not exist.

The important restoration work begun during Jubilee Year in 2000 brought the Palazzo back to its public use and ancient prestige. It involved the restoration of the external facades, the representation halls and the reorganization of museum itineraries, electrical systems and the thermal stations in one central body.

We provided both the electrical and thermal systems design managing the best procedures to meet regulatory requirements for operation. The project had great expectations, and we were gratified by the good results: our experience enabled us to fulfil our responsibility to hits important undertaking.

The Palazzo Ducale has been the political and administrative centre of the city of Lucca for eight centuries. In 1322 Castruccio Castracani degli Antelminelli, Duke of Lucca, acquired a palace around which he built a fortress, called the Augusta, which occupied about a fifth of the area of the whole city. On his death in 1328, the city lost its independence and many consecutive foreign rulers succeeded each other. In 1369, when Lucca obtained its independence through Emperor Charles IV, and the citizens decided to demolish the Augusta Fortress that had formed a symbol of foreign oppression. The Palazzo itself was saved and became the seat of the Gonfalonier and Government of the Elders of the Republic of Lucca. The Council Chamber and the 36 members of the Greater Council met here. The Palazzo of the Elders at the beginning of the sixteenth century was very picturesque. Id did not have a single architectural style but was a group of buildings of different periods and with different functions connected by passages and bridges. In 1577, the gunpowder tower exploded: the old Palazzo was completely destroyed and the adjoining buildings were badly damaged. A reconstruction was necessary. Firts, the architect Bartolomeo Ammannati (XVI century) and then architect Filippo Juvarra (XVIII century) were commissioned to draw up new plans for the Palazzo.

The sixteenth-century layout of the palazzo, developing between two courtyards, is attributable to Bartolomeo Ammannati, the eighteenth-century architecture of the north part of the Palazzo is attributable to Filippo Juvarra. Juvarra made a great work: he respected the old design but also created a huge, imposing building. Juvarra’s plans, still recognisable today, were fully implemented thanks to the power and authority of two dynamic women. The arrival of Elisa Baciocchi, sister of Napoleon and Princess of Lucca and Piombino from 1805, made it necessary to adapt the Palazzo to the needs of the new court. Se decreed the creation of the apartments of the Throne Quarter and of Piazza Napoleone, a square located in front of the building.

In 1817, Maria Louisa of Bourbon, who was chosen to govern the city on the decision of the Congress of Vienna, invited Lorenzo Nottolini, a young architect of the Royal House to complete the works that transformed the palazzo into a royal palace according to the new needs of the new European court.  Under his supervision an efficient team of sculptors, painters and stucco workers developed a homogeneous programme of decoration dedicated to the royal family. In 1847 the Palazzo was sold to Peter Leopold, Grand Duke of Tuscany, who donated a collection of painting as a substitution of the one lost by Charles Louis of Bourbon.

With national unification, the Palazzo became the property of the crown of Italy. The Royal House of Savoy had no interest in maintaining it and a large part of the furnishings were transferred to Palazzo Pitti. In 1867, 5 November, the Provincial Government of Lucca bought it for 300,000 lire.

The architectural unity of Palazzo Ducale started changing to become a suitable seat for the Provincial Government and the Prefecture’s offices – and later for internal alterations made to accommodate the Court of Appeal and the Public Prosecutor.

In the Twentieth Century The Palazzo continued to house numerous offices of public administration: the Prefecture, the Assize and Appeal Courts, the Public Art Gallery, Provincial Command of the Carabinieri and Central Post Office. In 1922, to the great regret of the local people, the Appeal Court was abolished and the offices on the first floor of Nottolini’s New Palazzina were occupied by the President and Council of the Province. In the 1930s, the Post Office was transferred to a new building in Via Vallisneri leaving the rooms on the ground floor of the Palazzo free. In 1938, two rooms in the Throne Quarter (the Sovereign’s Study and the Ministers’ and Councillors’ Room) became the headquarters of the Associazione Lucchese for the Promotion of Science, Literature and Arts. After the Second World War, the buildings were intensively used as offices for a number of bodies and over the years, this led to problems of deterioration, conservation and inappropriate use of parts of the buildings. When the Art Gallery was moved to the new National Museum in Palazzo Mansi at the end of the 1970s, the large rooms in the Throne Quarter became available to the Provincial Government once more and were used for temporary exhibitions and conferences. In 1979, Isa Belli Barsali organised the first study congress on the history of the building, with the aim of encouraging proper appreciation and restoration of the large imposing complex. From the 1980s onwards, with the increased importance of the powers delegated by the state to the provinces, and from 1993, with the direct election of the President of the Province, the relationship between citizens and the Provincial Government became closer. Plans to decentralise the offices and systematically restore the whole building were drawn up with a view to maximise the Palazzo’s potential and these became reality thanks mainly to Jubilee Year 2000 funds. With its busy calendar of appropriate cultural events, the Palazzo Ducale is once again the political and cultural centre of the city in relation to the rich, varied territory of the Province of Lucca.