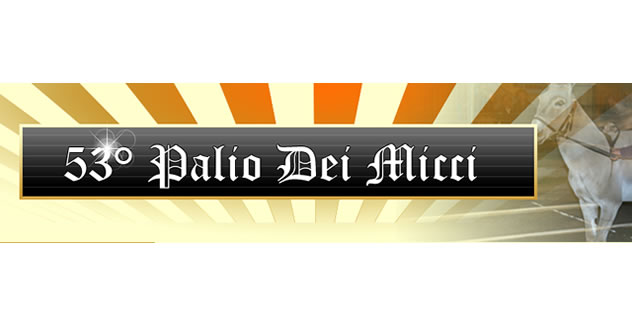 “Palio dei Micci” is an annual athletic, historical and folk contest which started in 1956. It is organised by a local committee with a big popular participation.

It involves a donkey racing among the 8 contrade (a generic name given to a type of Italian city subdivisions, now unofficial) named Cervia, Leon D’Oro, Lucertola, Ponte, Quercia, Pozzo and Ranocchio on the first Sunday of May inside Buon Riposo Seravezza Stadium.

"Palio dei Micci" is one of the historical traditions in Tuscany and the first one in the province of Lucca.

The contest starts with a parade the showing beautiful and historical costumes of dames, lords, armed, flag throwing and drummer men.

Every contrada usually represents an historical and chorographical exhibition about a story which is set in Versilia and where imagination and reality merges.

At the end of historical procession, the field is available for the music men and the flag throwing companies. About ten drums and clarions play in unison while many flags are thrown and whirled: this is one of the most suggestive moments of the whole exhibition.

"Palio dei Micci" ends with its donkey racing: Miccio is the Versilia dialect for Asino (Donkey).

This contest consists of 6 laps and it always drives the shouting and amused audience crazy.

It’s a big exhibition which has gained a large following in Lucca and the neighbourhood.

For many years, we have managed all the administrative and authorisation procedures and have offered our consultancy about safety systems.