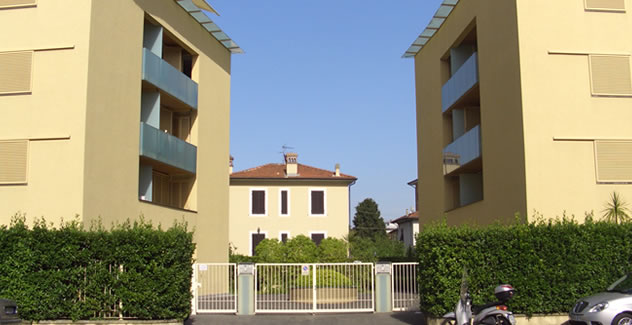 Elegant housing estate whose name derives from the fact it consists of two identical building.

With its modern and daring architecture it is one of the most qualified housing estate.

It was built for the requalification of an historic clothes manufacturing company in a decayed and degraded area.

It consists of 40 apartments for a total of 12.000, built in a narrow and long land previously occupied by the above-mentioned industrial building.

The architecture is defined by the yellow Terranova plaster (petrifying powdered lime).

The building coping is a milk-white shelter also used as the terrace parapets.

For its modern and non-traditional lines it was disapproved at the beginning but now it’s well inserted in the city thanks to its elegancy and functionality.

We managed the system design