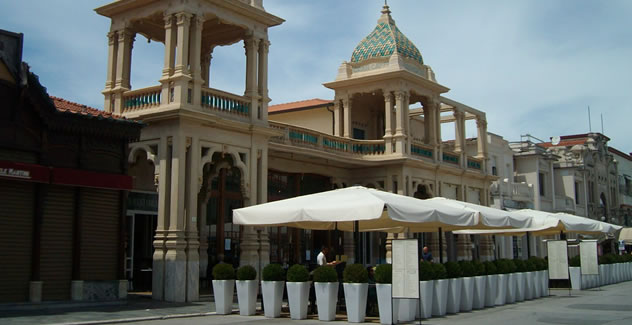 Gran Caffè Margherita is probably the most famous Viareggio club; it is an example of liberty style with oriental cross-reference marks.

It is located in the wonderful and fascinating promenade, Viale Regina Margherita, and it was inaugurated in 1902 with its radiant wood pavilions where café bars, restaurants, clubs and bathing establishments. Almost all were disrupted by a fire in 1917.

It was reconstructed in 1928 with a new legend still alive.

For its reconstruction modern techniques were used obtaining the two orientalised turrets with blue and white majolica tiles.

After the Second World War until the sixties, it was the centre of summer holidays making Viareggio world-famous.

With cultural evolution, especially during the last decade, Caffé Margherita use has significantly changed: now it is a high rank bookshop with a restaurant attached.

We followed the direction and designing of the works, in particular the system design and the fire prevention.