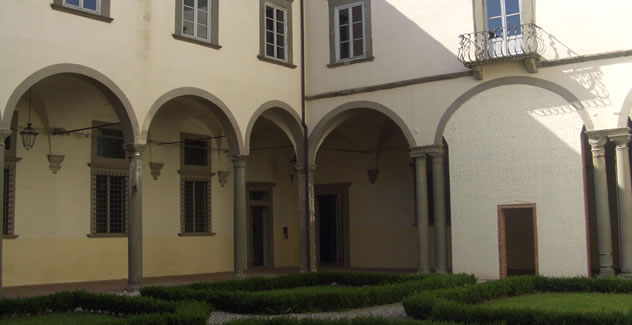 Ex Real Collegio Complex is next to S. Frediano Church and is arranged around 3 cloisters. The most ancient cloister dates back to medieval period and corresponds to S. Caterina Cloister, the other two date back to XVI and XVII century.

It represents 500 years of our city story from 1517 when, during the reformer movement, S. Frediano Monastery passed to Lateran canons and Lucca became centre of the reform.

In 1870 Vatican suppressed the reform and the Complex was transformed to accommodate public students until 1880.

At the end the Principato was called Collegio Nazionale until Bourbon Duchy Era when it was called COllegio Carlo Ludovico, and then Ferdinando under Lorena dynasty.

Since the Italian unification, it has been called Real Collegio. It didn’t change its name even when it was closed to hold many city schools (ITC Carrara, Istituto Professionale Einaudi e Civitali) and other cultural associations since 1939.

After the Second World War it gave hospitality to many Istria refugees.

Thanks to special financing, Pisa Superintendence supervised its recent renovation to open it as a Diocesan museum.

Waiting its finishing, the restored part is property of Ente Real Collegio which uses it for exhibitions valorising our land.

We accepted the superintendence assignment, together with Consiluim srl Studio in Florence, consisting of system testing of the first part of work.

We also manage the authorising procedures on the owner’s behalf.