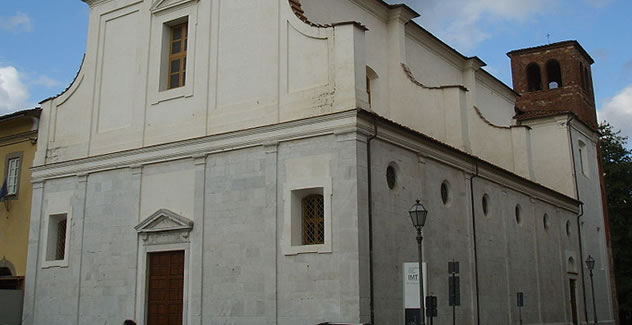 S. Ponziano is a Church located in the omonimum square in Lucca.

It was already known in the 9th century and in 1099 it was gave to the Benedictines and in the 14th century the Olivetani succeeded. In 1474 it hosted the relics of Saint Ponziano and took the present name. It was restored between the centuries 16th and 17th. In the chapel on the right a 12th century fresco representing "Saint Martin" remains. The outside has a white limestone facing measured by pilasters. The façade was finished in the early 17th century. About in 1720 the inside was divided into three naves separated by pillars and it was adorned with paintings, sculptures and stuccoes. In 1963 it was re-officiated after a period under the State property.

It was deconsecrated in 2006 and, after a restoration, it was open to give the hospitality to a library where professors, students attending the Scuola di Alti Studi IMT di Lucca can study.

The restoration work was completed respecting the original system and using ultra modern technologies with glass and steel complementing one another and which is possible to understand only after admiring it.

We had the honour to be involved in the restoration work resolving difficult problems concerned to the systems. Anyway, we confronted successfully them with determination and with all our professionalism; it was a difficult test but we are happy to remember it because it makes us proud.

We also managed the authorising procedures to start the activity.