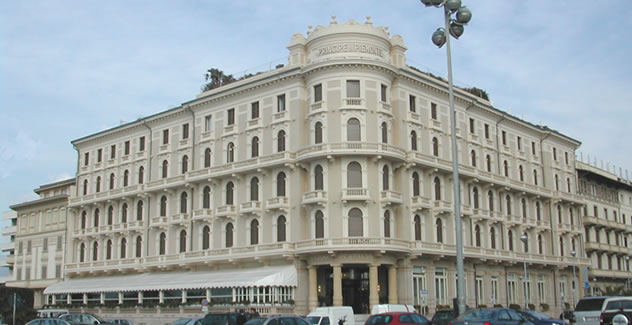 The restoration of Principe di Piemonte, begun in 2002 and completed 2 years later, is unquestionably the most prestigious restyling work in the tourism sector in Lucca.

The hotel, the indisputable symbol of Viareggio tourism in the 1920s, was a crumbling building that had lost its ancient prestige. Many inappropriate restoration works contributed to dim its original aristocratic beauty.

A group of enthusiastic and daring entrepreneurs underwrote its total recovery with a huge investment of capital and workforce.  The local authorities encouraged and supported the operation to assure that the Principe di Piemonte was rebuilt in a manner faithful to its original image.

The hotel has 87 standard rooms and 16 suites, for a total of 248 sleeping accommodations, on five floors. The rooms are furnished according to different styles (International, Deco, Colonial, Empire and Modern) in order to present a virtual journey among the different styles adopted by the most important hotels. Principe has a total of 7 floors.

It offers a fine dining restaurant, open to the public as well as its guests, presenting both international and national dishes.   The hotel has an elegantly equipped wellness centre and a swimming pool with hydro massage located on the fifth floor terrace. Nearby is the restaurant, an ideal place for the hot summer nights in Versilia.

The hotel is fully equipped with innovative solutions and state-of-the-art technology, making Principe one of the most comfortable and well-organised hotels of the area.

We are proud to have participated in the workgroup that designed the restructure of the Principe, a hotel unique for its history, arts and investment. We managed the technological systems design and the administrative procedures to reopen the Hotel to the total satisfaction of our client.

Viareggio made a name for itself as the most famous and most frequented beach area during the 1920s thanks to its process of modernising and developing with construction of luxury and prestigious hotels which transformed the Viareggio coastal area. In this environment entered the Florentine nobleman Giuseppe De Micheli, bought lands to build a hotel (completed in a record time of 240 days) as well as the bathing area in front of it.

The opening of the new hotel with the name Select Palace Hotel was announced by magazines and newspapers of those years (including “La Nazione” newspapers of 15 Giugno 1922). The hotel immediately became a prestigious stage hosting the national and international aristocracy like His Royal Highness The Prince Seis Islam Mohamet,  the King of Yemen’s second –born, who visited Viareggio in 1927.

Select’s intense activity continued in the bathing establishment equipped with two ballrooms located in front of the hotel.  In the carefree atmosphere of balls, charity parties, beauty contests and so on, Select spent its happiest years. In 1938 Select was rechristened the Grand Hotel Principe di Piemonte by the Ministry of Popular Culture. The change of name did not affect its fame which is still a well established fact today.